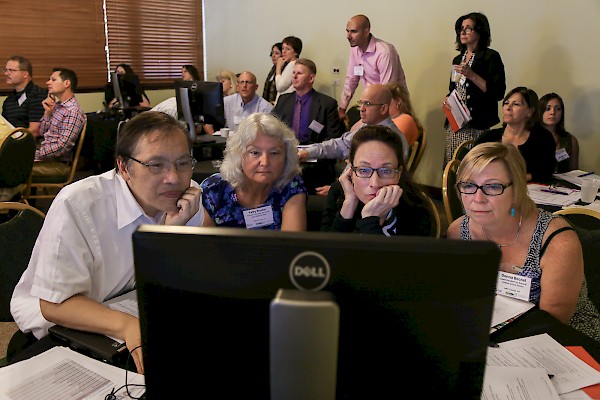 Above: Photo by Nathan Dehart

Wellville: Can a Startup Transform Health Care in Lake County?

A group of tech entrepreneurs from Silicon Valley has taken on a huge task — trying to transform an entire community’s health status in five places across the country, in just five years.

One of those targets is in rural Lake County, just north of Napa. The challenge is to find out if those innovators, with all of their tech tools, can help reverse some of the worst health trends in the state.

But Clear Lake is a Superfund site, the Konocti Resort has closed, and Lake County ranks among the poorest counties in the nation.

“Lake County has a lot of challenges,” says Marshall Kubota, medical director for Partnership HealthPlan of California, which covers the low-income Medi-Cal managed care patients in Lake County — about 40 percent of the population.

“It’s somewhat isolated,” he says, “it is a county whose economics are in hard times.”


Statewide, Lake County ranks dead last in a number of health indicators, with extremely high rates of smoking, obesity, mental illness and domestic violence. And, of course, Kubota says, they don’t call it the meth capital of Northern California for nothing.

The Wellville project uses a program called ReThink Health as a framework to train health professionals on ways to reform care systems.(Nathan DeHart)

That dubious claim to fame and those horrible health care numbers have caught the attention of one Silicon Valley philanthropist and a nonprofit project called the Way to Wellville.

Esther Dyson is a technology investor and founder of the project.

The Way to Wellville

One of the first steps in changing health care systems is to get everyone in the same room, as Dyson arranged in a June meeting in a small convention room in the resort town of Upper Lake.

“Our premise doing this is that most health interventions are like peeing in the lake. No visible outcome,” Dyson says. “So what we’re trying to do is find a bathtub, a smaller community like Lake County, and do things at critical density.”

The five site participants identify specific goals, make a business plan and then start transforming pieces of the health system. One year into the project, there’s no windfall of money, just a professional team of advisors, and the determination to get things moving.

“We’re not waltzing in here and saying you need to do the Silicon Valley thing,” Dyson says. “We’re not fixing everything, we want to help them fix it, but they need to have the faith and energy to give it a whirl, even though it’s been a long time and they’re tired.”

Technology is part of the equation. IBM is already onboard, using its Watson Health artificial intelligence computer at a South Carolina Wellville site. The cutting edge analysis is helping direct programs to control childhood obesity and to sign up more people for Medicaid.

IBM also has a close relationship with Apple on health projects, and the Wellville hope runs high for a collaboration utilizing the iPhone or the Apple Watch. Other possibilities include use of wearable fitness bands like Fitbits to self-monitor activity.

Karen Tait is health officer in Lake County’s public health department, and she politely has chosen not to directly participate in the county effort. Resources are thin in Lake County, she says, and the reality is, she just doesn’t have the time to take on more.

“I don’t want to unduly criticize their approach,” Tait says. “There’s quite a different culture here. Whether or not it’s really going to be a fit, I think we’re still waiting to see how that plays out.”

But David Santos,  CEO of St. Helena Hospital in Clearlake, doesn’t want to take a wait-and-see approach. There’s no more time to wait, he says, and he’s sick of what he’s seen.


Santos says the entire community is starting to get motivated and that people feed off the energy once you start the process of change.

“To bring a team of leaders throughout the county together for one common cause was the single most significant thing that has happened in this county in a long, long time,” Santos says.

He says there is no incentive to change quite like being last in the state.

Just down the road from the training session, you don’t have to look hard to see the real-world examples of Lake County’s challenges.  Walk onto the dirt path behind Ray’s supermarket in Clearlake, and you see dozens of makeshift lean-to’s tucked among the shrubs. It’s one of several homeless encampments around here.

Chad Lindsay, 28, is new here, only six months homeless, and he can’t quite believe he’s here.

“I stay away from the homeless shelters,” Lindsay says. “I can’t stand to look at the people’s faces when they’re so defeated. And it’s like, how do you stay homeless for six years in the same town or even the  same tent, the same spot? Can you imagine that?”

Esther Dyson says the trickiest part to the whole project is not combatting any particular health issue — it’s just getting people to cooperate and try something new.

Like any large and complex undertaking, success will depend in part on effort, on innovation — and in part on funding from Silicon Valley investors.

“We are still hoping to get them up here, not just for philanthropy, but a data center, a hydroponic farm, to reopen the Konocti Resort,” she says. “If I can’t get one or two of those Silicon Valley entrepreneurs up here, I’ll be very disappointed.”

Whatever funding comes from venture capital, and whatever help comes through tech innovation from IBM or Apple, the success of this project clearly rests almost entirely on the health community in Lake County — that roomful of people in that tiny conference room in Upper Lake.