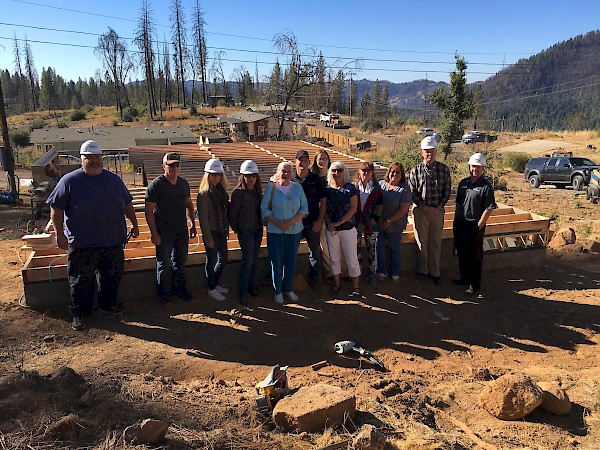 Suzanne Koester, a Lake County resident who emigrated from Germany in 1982, loves the area for the peaceful country life it offers. She is a survivor of the Valley Fire, which destroyed her home in Cobb in 2015. Since then, she has been living in a rental on the other side of the lake, waiting for the day she can break ground on her new house. Thanks to the CalHome Loan Program, that day has finally come: on October 6, there was a ceremonial groundbreaking on Koester’s home, and work has begun in earnest.

Like so many survivors, Koester was underinsured at the time of the fire. The CalHome Loan Program, run by Hammers for Hope and administered by North Coast Opportunities (NCO), will bridge the gap between her insurance payout and the cost of rebuilding her home.

The CalHome Loan Program is funded through the California Department of Housing and Community Development. The program targets low- to moderate-income households who own or rented a home destroyed by the 2015 Valley Fire or the 2016 Clayton Fire. It provides a 30-year loan with 0% interest and is significantly easier to qualify for than a traditional mortgage or loan.

Hammers for Hope was awarded the grant, and selected NCO to be its program operator. “As a Board, we felt strongly that we needed a program operator with the administrative experience and capacity to implement the program efficiently, as well as strong connections in the community,” said Hammers for Hope Board Chairman Rob Brown. “NCO has been on the ground with fire survivors since day one.”

“Such a big undertaking requires a lot of collaboration,” said NCO Executive Director Patty Bruder. “NCO has the resources and infrastructure in place to manage the administrative side, allowing Hammers for Hope to focus on the rebuilds.” According to Melissa Hughes, NCO’s Housing & Homelessness Resources Manager, “This is an incredible opportunity to assist those who were uninsured or underinsured at the time of the fire. This program enables people who aren’t in a position to rebuild the opportunity to do so.”

“Our Board is extremely excited to get this CalHome funding out to the fire victims,” said Hammers for Hope Treasurer Mark Borghesani. “With the assistance of NCO and CalHome, our first draw has been approved and building funds are on the way.”

Koester’s home will be built by Lake County Contractors, owned and operated by Mark Mitchell and Aaron Wooden. Hers is the first of several dozen homes that will be rebuilt thanks to the millions of dollars available through the CalHome Loan Program.

“Having a 30-year, zero-interest loan from Hammers for Hope makes all the difference for me as a low-income resident,” Koester said. “I will be able to rebuild my life on Cobb, enjoy planting a new garden, and not worry about another mortgage.”

Borghesani said with approximately 60-70 proposed projects, there is a lot of work to do. “We will be doing a mix of stick-built homes, modular homes, and contractor-built homes,” he said.

In addition to working with private contractors, Hammers for Hope is also working with nonprofit organizations such as Hope City to help homeowners rebuild with funding through the CalHome Loan Program.

“We are looking forward to working with all our partners, most notably Kevin Cox from Hope City,” Borghesani said. “We also want to thank Senator Mike McGuire and his team for their support.”

“I’m hopeful for the future,” said Koester. “The wounds of the land are healing, and neighbors will come back.”

Next: Calpine Corporation donates over $30,000 to senior centers and food banks »