It all began in early 2013 when Class XX Leadership Mendocino participant Heather Gurewitz decided on her community project. That decision reflected her belief that many of those who had graduated from the 10-month long program were looking for more opportunities to connect and talk about local issues.

From that point forward, Heather navigated the twists, turns and bumps in the road that often happen when planning a project. Along the way she was able to add a project partner, Class XXI participant Michael Maslak, who brought years of leadership coaching to the effort. With sponsorships from the Mendocino County Sheriff's Office and Starbucks secured, all that was left was to invite the twenty classes of Leadership Mendocino graduates to the January 31, 2014 event entitled Leadership Mendocino ReConnect.

The slots filled quickly for the afternoon workshop which boasted an agenda that included not only Maslak but also alumni members Sheriff Tom Allman, Gwen Matthews, Richard Cooper and Anne Molgaard as guest 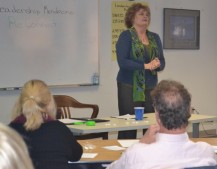 speakers and facilitators. As people arrived at the Mendocino Room of Mendocino Works in Ukiah, the room came alive with laughter and the buzz of renewed connections.

At the close of the event, Gurewitz took the opportunity to thank all of those who helped make her project dream a reality including Susan Lightfoot, Pamela Patterson and Leadership Mendocino Steering Committee members John Kuhry and Richard Strom who provided additional support during the afternoon. As the attendees slowly trickled out the door, it was clear from their comments that the day was not only a success, but that most look forward to more opportunities like this to ReConnect.

« Previous: Learning to be Clear Advocates for a Cause