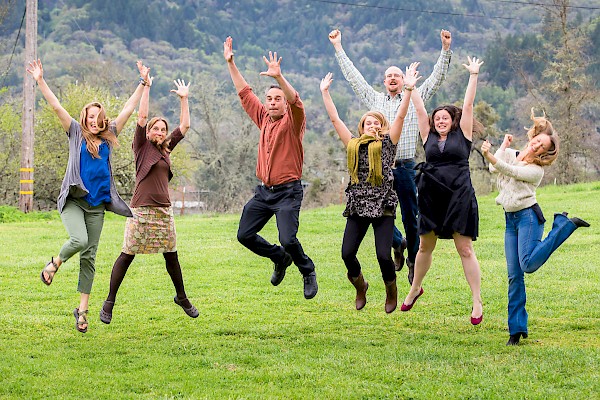 Above: The Farmers Convergence planning committee jumps for joy after the successful event drew to a close on Tuesday, March 10.

This annual event is organized and facilitated by North Coast Opportunities. It was hosted for the second year in a row by The Golden Rule community at Ridgewood Ranch, which catered breakfast and lunch using many ingredients they grow and process themselves. The cost to attend was $10 per person, with most of the funds going to pay for food contributed by The Golden Rule and several local farms including Leonardis Organics in Lake County and Lovin’ Mama Farm in Mendocino County.

Now in its third year, the Convergence managed to maintain the same energy and enthusiasm as in years past, but there was a slightly different vibe this time around. The two presentations – one by the new MendoLake Food Hub and another by Alan Haight of Riverhill Farm – each focused on the business side of farming. “There was a maturity and focus at this year’s Convergence that felt more serious than in years past; people were really ready to get down to brass tacks,” said NCO Outreach Coordinator Elizabeth Archer, who helped plan the first and second Convergence events and is now the primary organizer. “What’s great is that the focus didn’t come at the expense of the enthusiasm we’ve come to expect and love from this event – people left feeling inspired and ready for the growing season ahead.”

Many successful elements from both of the previous years were replicated, including a surprisingly popular mingling exercise in the morning (“I usually hate ice breakers, but this was great!” commented one attendee) plus roundtable discussions covering a variety topics from funding and finance options to soil health to mapping a farm. One new addition this year was a fun and free raffle at the end of the day, plus a popular roundtable called “Ask a Produce Manager” hosted by the Ukiah Natural Foods Co-Op and Harvest Market.

Feedback from the day was overwhelmingly positive. Said Colleen Rentsch of Seely Farm Stand in Upper Lake, “The overall sense of community that is shared at this event is something that doesn't happen most places.  Even with the diverse dynamic of farm approaches, I never felt uncomfortable.  On the contrary, I made new friends and connections.”

After three successful iterations, the North Coast Farmers Convergence isn’t showing any signs of age – one farmer commented on his evaluation that he looks forward to the event all year, and many others expressed gratitude for providing the local food community and the organizations that support them the chance to gather every year. Tangible results are clear every year, with many folks gaining access to resources and programs they didn’t know existed. According to Sandra Mireles of Seabiscuit South Farm, “I learned that there is a lot more support for the small farmer than I ever imagined.”