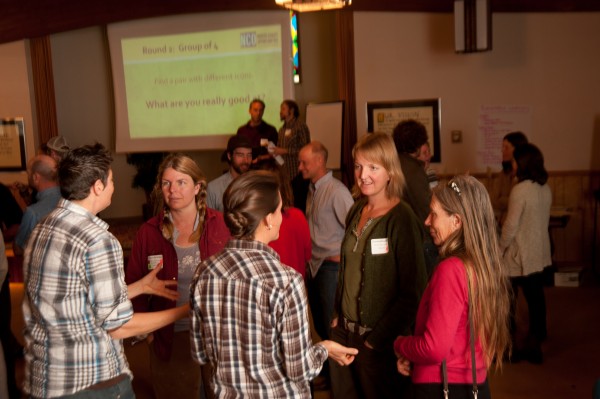 More than 100 local farmers gathered for the second annual North Coast Farmers Convergence on Wednesday, March 5 at The Ridgewood Ranch, just south of Willits. Also in attendance were people who work with food producers, including buyers and support organizations. In all, about 160 people spent six engaging hours together. Rain fell steadily throughout the day, which many participants joyfully called a “benediction” on the event.

The North Coast Farmers Convergence is designed to bring the farming community together, a rare opportunity for a crowd used to solitary work and an unforgiving schedule. Farmers, ranchers, dairy producers, foragers, seed growers, beekeepers, vendors, buyers, food producer supporters, and more gathered to hear inspiring stories, discuss a range of topics, and connect with friends new and old. People came from all over the area, including Mendocino, Lake, Sonoma, Humboldt, Marin, and Napa counties.

The event is organized and facilitated by North Coast Opportunities – Community Action, and was hosted by The Golden Rule community at Ridgewood Ranch, which catered an incredible breakfast and lunch using many ingredients they grew and processed themselves. In addition, 22 farmers and two local markets donated ingredients to help keep costs down. The cost to attend was $10 per person, with half of the registration funds going to the Mendocino County Farmers Market EBT Match Program. Through this program, recipients of SNAP or CalFresh EBT (food stamps) get up to $15 of their funds matched at local farmers markets, for a total spending power of $30. According to Ukiah Farmers Market Manager and North Bay Made member Scott Cratty, “The match program attracts people who did not know they could use their EBT at the farmers market, which is a win for them as well as our farmers.”

“We tried to strike the perfect balance between structured activities and free time for people to have their own conversations,” says Susan Lightfoot, coordinator of Farm2Fork, a program of NCO. Most participants felt that balance was successfully achieved. “The organized elements caused an amazing amount of random connections – the day had great dynamics,” said Christopher Brown of Aqua Gardens Family Farm in Ukiah. He added, “Having organized and managed this kind of meeting before, I know what it takes and what you hope for – and [NCO] nailed it!”

Many successful elements from last year’s event were replicated, including roundtable discussions covering a range of topics including farm and food safety, how to build a CSA business, and the drought. New to the Convergence this year were the “Sidewalk Consultants,” a panel of experts available for one-on-one consultations during lunch. The experts were coordinated by Paula Gaska, co-owner of Mendocino Organics, a consultant for West Company, and a member of the 10-person Convergence planning committee. “Farmers walked away from their consulting sessions with both knowledge and inspiration,” says Gaska. “They also got a taste of how beneficial it is to seek assistance from the experts in our farming community."

Feedback from the day was overwhelmingly positive, with many people commenting about how useful and inspiring it was. Said one farmer, “My heart opened and my motivation came back a bit.”

In addition to being an inspiring event, the Convergence has immediate and tangible effects. For example, First Light Farm of Petaluma formed a partnership with Raley’s Supermarket to bring more local produce into its stores, with their potatoes appearing on Raley’s shelves within a week.

With two successful events under its belt, NCO is already looking forward to next year’s Convergence. That won’t be soon enough for some farmers, many of whom requested it be turned into a biannual affair; high praise from a demographic that is often reluctant to spend a day away from the farm. Sidewalk Consultant Stephen Decater of Live Power Farm in Covelo summed it up nicely by saying, “It was good to be together with everyone working in so many different ways. You could feel the power of this tremendous growth of interest in and support for transforming agriculture.”