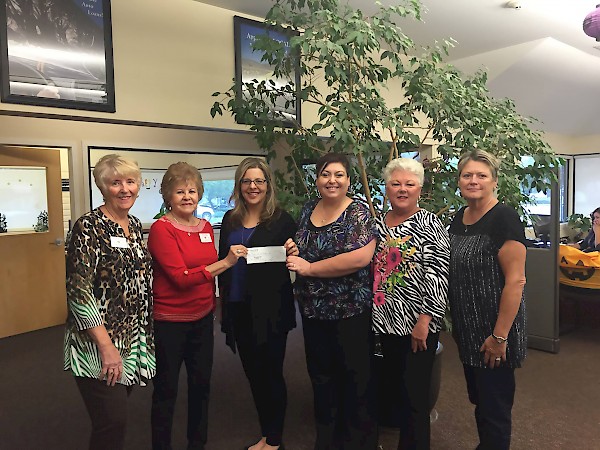 Above: Representatives from Women of the Moose give a $5,000 check to MLCU employees, to benefit the Valley Fire Relief Fund.

The Valley Fire Relief Fund received almost 1,500 applications, a clear indicator of the enormous need left in the wake of California’s third most destructive fire in modern history. To date, the fund has sent about 900 checks in $1,000 or $1,500 increments to fire survivors, totaling more than $1.2 million in direct aid.

The fund is run by North Coast Opportunities (NCO) and Mendo Lake Credit Union (MLCU) in partnership with Savings Bank of Mendocino County, Tri Counties Bank, and United Way of Wine Country, with additional funding from Redwood Credit Union. Applications are reviewed by a managing committee, which classifies them based on levels of need.

“The committee has spent many hours reviewing applications, and tries to spread the available funds as fairly and evenly as possible,” says NCO Executive Assistant Elizabeth Archer, who has been the fund’s primary organizer and contact person. Of course, the Valley Fire Relief Fund can only give out as much as it raises. Nearly all available funds have been disbursed, and as of November 2 applications were no longer being accepted – a date that was widely advertised through social media, radio, and other outreach efforts.

With 600 unfunded applications left, the committee had to make difficult decisions. Anyone with good insurance coverage, a high income level, and/or a relatively minor level of loss was deemed ineligible; 400 applicants were sent letters saying they will not receive funding. “We did not take any decision lightly,” says Archer. “Quite the opposite; we agonized over every one, because we know the impact each decision can have on someone affected by the fire.”

The committee has classified the remaining 200 applications as “will fund when possible” – in other words, those applicants will only get financial assistance if more money is raised. If enough comes in to cover them all, the fund will be able to send checks to 75% of those who applied.

Fortunately, large donations have continued to arrive from fundraisers, organizations, businesses, and individuals. For example, on 10/25 the “Neighbors Helping Neighbors” event in Ukiah raised $95,000. And, just last week the Women of the Moose gave $5,000. “We learned that this fund had been set up for those impacted by the Valley Fire, and that it would distribute directly to evacuees who lost their homes,” says Senior Regent Alice Veiga about why the group chose to donate to this fund. She adds that the money was donated by many individuals specifically to help fire survivors, saying, “We’ve been so amazed by the generosity of people within and outside our community.”

That sentiment is echoed by nearly everyone who has been involved with fire relief. “It’s so moving to see how many donations we continue to receive,” says NCO CFO Carolyn Welch. “As soon as money comes in, we send it back out.” Adds Archer, “It’s nice to see the pile shrink, but there are still a lot of unfunded applications. We’re crossing our fingers that we raise enough to cover all of them.”

In order to ensure the highest possible impact, NCO has paid for 100% of the administrative cost of running the fund, including over 1,000 staff hours and thousands of dollars in postage, printing costs, and issued checks. Archer says that in future disaster relief situations, NCO’s Board of Directors would have to re-examine whether or not the organization could cover the cost of such a high volume of work. However, it was clear to everyone involved that this was the right decision for this summer’s devastating wildfires. Says NCO Board Vice Chair Ross Walker, “We were responding to a tremendous need in the community, and we wouldn’t have wanted to do it any other way.”

Click here to donate to the Valley Fire Relief Fund.

« Previous: NCO teams up with Lake County on long-term recovery