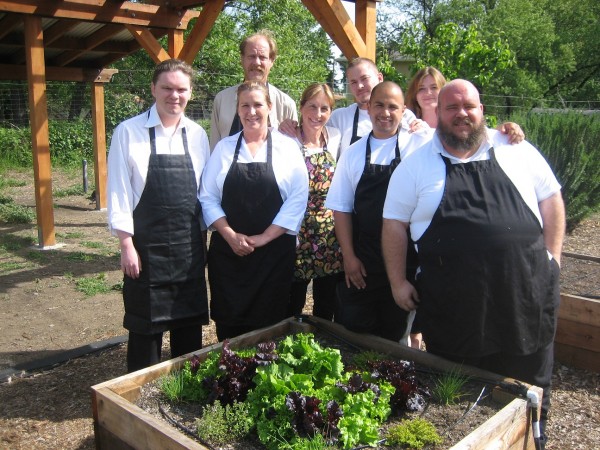 SOUP: Teaching Job Skills and Building Community, One Cooking Class at a Time

A drizzle falls as a group heads outside from the kitchen at the Buddy Eller Center, part of the Ford Street Project in Ukiah. No one seems to notice the rain as they grab tools and gather around a compost pile they have been building. “You need to make sure the center of the pile gets plenty of oxygen,” says Carolyn Brown, who took over as garden manager on May 1. “Otherwise it turns blue and slimy, and does not break down in ways that benefit the plants.”  After a quick compost demo in which kitchen scraps are added to the pile, the group disperses to do some weeding. A few participants joke around but are quickly brought back in focus by a fellow classmate: “If you can’t talk and work at the same time…” he doesn’t have a chance to finish before one of the jokesters says cheerfully, “Then just work?” Everyone laughs as he picks up a shovel and digs in.

The group is taking part in a series of classes sponsored by SOUP, a grant-funded project through North Coast Opportunities–Community Action in partnership with the Ford Street Project. There are three core classes: Food Safety, Knife Skills, and Kitchen Operations. After a participant has taken the three core classes, he or she can pursue an elective track: Garden Basics, Healthy Meals, and Food Preservation, each of which includes three classes. They are offered on a continuum so that if a participant starts in the middle of a series, he or she can take any missed classes once the next round starts.

SOUP and Food Prep Project Coordinator April Cunningham developed the curriculum and teaches most of the classes herself. Free to residents, the program comprises people from the Ford Street Project, which offers rehabilitation services, and Annie’s House, which provides transitional housing. “Working with the Ford Street population and providing classes about making healthy choices and growing food has been amazing. These are great people making positive changes in their lives, so infusing nutrition into that path is a natural fit,” says Cunningham. She adds with a smile, “We make some really fabulous food, too.”

After nearly two hours of learning about composting and weeding, everyone is still engaged as they transition to a cooking demonstration about the power of broccoli. Participants are eager to learn and ask many thoughtful questions about the subject at hand, many of which are answered by classmates. The group has amassed an impressive knowledge bank, with students rapidly responding to questions about how to tell if something has saturated fat, how to emulsify oils, and how many grams of fiber are recommended per day. As they sample a broccoli salad with cranberries and sunflower seeds, the group launches into a lively debate about whether or not broccoli can be juiced. “Let’s try it next week!” Cunningham enthusiastically suggests.

SOUP is funded by a one-year grant that ends in June, but the Food Prep project is perfectly poised to take over where SOUP leaves off. The Food Prep project is designed to teach the participants more job skills by creating prepared foods from vegetables, many of which they plan to grow in the new on-site garden. Cunningham and the team are currently trying catering on for size, with help from Ford Street Kitchen Manager Mario Pulido, who relates to the participants and is excited about how many people are getting involved. “I never thought I’d be a manager, but here I am,” he says. “I want to show them that if I can do it, they can too. If they learn the skills and enjoy the work, they can succeed in the kitchen.”

Their first catered event was a memorial service on April 11 in honor of a former resident. Since then, the Food Prep team has catered five events to encouraging acclaim, and has four more scheduled.

Participants in the program are open and honest; they support and encourage one another, creating community among what is traditionally a transient population. Many admit to being former drug addicts without breaking eye contact. “This program gave me something positive and constructive to do as I was trying to get back on my feet,” says Cindy, a graduate of the program who has continued to attend classes and assists with catering events. “It has helped me heal in so many ways.” There’s no shame for participants in a program that’s designed to teach them valuable skills that could translate into paying work. In fact, it already is.

Lawrence Ortiz was washing dishes at the Buddy Eller Center one day when he overheard one of the classes; he asked for and was given permission to join in. Since completing the series, Ortiz has earned his food handler certificate and recently started a part-time job as a prep cook at Applebee’s. He will enroll in Mendocino College’s culinary program in the fall. “I went from being a roofer to a cook,” says Ortiz. “It’s pretty incredible.”

Mike is another success story. Since completing the program, he’s gotten a job in a grocery produce department. One day he pointed out that they shouldn’t put certain fruits together because they’d ripen faster, something he learned in the program. Impressed by his knowledge, the produce manager quickly offered him more hours. Mike is now working toward getting his own place, and credits the SOUP classes with much of his current success. “It seriously improved my life,” he says.

It’s common for graduates to return to socialize and help with events, and Cunningham hopes the program will grow with their help. “Even once they’ve graduated and moved on, they’re always welcome back,” says Cunningham. “And they do come back.”

For more information about the project or the catering business, contact April Cunningham at acunningham@ncoinc.org or 467-3212.

Next: Foster Grandparent Program under attack despite proven track record »

« Previous: Celebrating 50 Years of Community Action in the United States