News » Richard Cooper: A role model among us 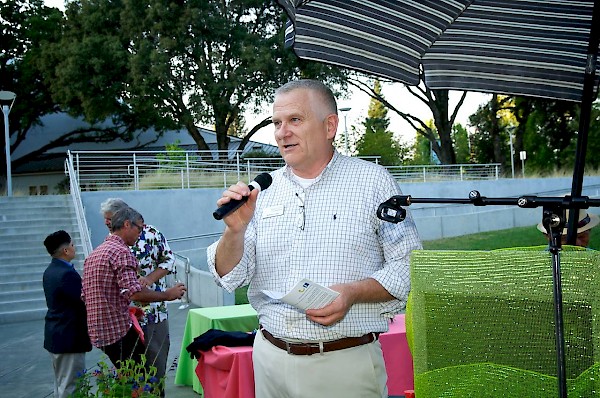 Richard Cooper: A role model among us

Richard Cooper hit the county running in 2008 when he relocated from Ventura to become the CEO and President of Mendo Lake Credit Union.  It wasn’t a sprint however but more like an enthusiastic puppy eager to meet everyone in his path, attend every event on the calendar, and join a number of boards in his quest to assimilate and please.

“When I was hired,” he smiles, “my marching orders from the MLCU Board were to be out in the community, to make the Credit Union more visible.” Cooper, who had been a vice president in government relations, knew the ropes.

Due to his down to earth earnestness and a natural inclination, Cooper’s renown in the county was swift.

He also attributes his quick rise to a leadership role to the county-wide networking that comes with the Leadership Mendocino (LM) program. He applied right away.

A Class sixteen LM graduate in 2009, Cooper credits the connections he made in the program as “the hands across the county” in terms of meeting so many people from diverse backgrounds and occupations. He continues to run into them today. He cites an example of meeting James Russ, director of the Round Valley Health Clinic at a class, and then working with him later on the Resource for Native Development board of directors.

A LM class member recently asked him to speak to a group after hearing Cooper’s explanation of the banking and credit union world as they relate to the legalization of cannabis in California without the same status by the federal government.

Cooper exemplifies the five leadership practices espoused by Leadership Mendocino’s program. He “models the way” by example. In 2010 his leadership was recognized by the Greater Ukiah Chamber of Commerce when he was honored as a “local hero” and received the Businessman of the Year award. In 2014 Cooper was named the Chamber’s Volunteer of the Year.

Quickly deflecting attention of his own achievements, Cooper blurts out how much he admires the strong powerful women who run so many non-profits as well as the county government including Camille Schraeder, Dina Polkinghorne, Anne Molgaard, Katie Fairbairn, Mary Anne Payne, Patty Bruder, Jacque Williams, and Carmel Angelo, to name a few. “They are folks who get the job done!”

When it comes to “inspiring a shared vision” Cooper helped Mendocino College increase the income from their fundraising gala by encouraging the upgrading of amenities, venue and auction items and bringing in new funds by increasing the attendance with people from out of the area.

He constantly “challenges the process” of institutional banking by demonstrating how a Credit Union, which is owned by the members who bank their money and take out loans, is a mutually beneficial financial institution.

“Enabling others to act” is a Cooper specialty. Employees at the Mendo Lake Credit Union are incentivized to give back to the community. Some do financial literacy workshops at the college. Others volunteer with the VITA, an income tax preparation program for low income taxpayers.  They participate in the Chili Cook off and dozens of other service clubs, charities and events. “By volunteering they earn points which are applied to their annual performance reviews. For every two hours of service in a month, their names are also entered into a drawing to win a $50 gift card,” he explains.  “We try to keep it fun – but also encourage our team members to see the big difference that their individual actions can make!

“Encouraging the heart” is part of the job. “Our branch managers really get it,” says Cooper.  At their Clearlake branch where many of the members get by on less than a thousand dollars a month, the staff go out of their way to help educate members on making smart financial decisions – encouraging members to pay themselves first by saving regularly and avoiding unnecessary debt.  “Part of a Credit Union’s mission is to outreach to those underserved by other traditional banking options,” says Cooper.

How does he do all that he does? “Being out in the community is the part of my job that I enjoy most,” says Cooper. “Our vision is to make Mendocino County a better place to live and work. We work hard to keep our services available at no or low cost. I believe we and the Savings Bank [of Mendocino County] do a great job!”