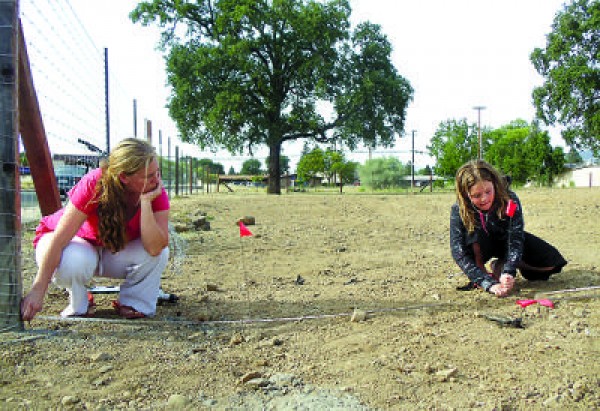 Dana Armstrong and her family cannot wait to plant their first garden.

"He makes awesome salsa," Armstrong said of her husband, Roy, explaining that they plan to grow plenty of jalapeños and tomatoes, ingredients they seem to buy bushels of each week.

Last week, the Armstrongs and their daughter Zöe, 10, were helping map out their garden plot and dozens more in front of the Summercreek Apartment complex on Village Circle, where the family lives.

The large area off East Gobbi Street was just fenced off Thursday as one of the latest community gardens started by North Coast Opportunities' Gardens Project.

Project Coordinator Miles Gordon said he approached the city of Ukiah about finding new locations for gardens after learning that the Cleveland Lane Community Garden near the Grace Hudson Museum would have to close because of the facility's renovation plans.

The city suggested a corner of Vinewood Park, and Gordon said he approached the property owners near Village Circle.

Stephanie Logsdon on the Gardens Project said nearby residents, including many senior citizens across the street, are very excited about the new garden and anxious to use it.

"At least three or four people check on us every day to see our progress," Logsdon said, adding that many people who don't plan to use the gardens are happy to see positive activity in the park, which has been plagued by vandalism and other unwanted activity.

"There's a lot of hope that this will bring something different than what has gone on before," she said, adding that many of the teens building the fence admitted that they had committed some of the vandalism.

The Village Circle Community Garden land has had problems, as well. Transients tend to congregate along the nearby railroad tracks, often seeking shade under the large oak trees that are now inside the garden's fence.

Elizabeth Archer, outreach coordinator for the Gardens Project, said she and other staff members have been talking with transients and others in the area for months about the garden, and all have been supportive of it, many offering to help and expressing interest in using it.

"Water conservation is very important, so everyone is required to use drip irrigation," Gordon told the future gardeners at Village Circle. Even before this year's drought, Gordon said the project has always made conservation a priority, incorporating not only drip irrigation but the use of mulch and plants that need less water into its community gardens

As the city of Ukiah prepares for a summer without enough water for irrigation, the Ukiah City Council is mulling the need for mandatory water restrictions, or Phase II. In the past, those restrictions meant residents could not water their lawns or vegetable gardens.

"These gardens provide a tremendous source of nutritional food, economic relief and community health that would be severely impacted as a result of the proposed elimination of water for vegetable gardens," Gordon wrote in a letter to the city, suggesting that the Phase II restrictions be modified to allow use of water for fruit and vegetable gardens, but require that drip irrigation and mulch be used, and that water only be applied in the morning or evening.

The council has yet to make a decision about water restrictions.

In the meantime, the gardeners will pay for the water they use, about $20 to $30 a year, since the new gardens will be the first to not have their water bills subsidized.

"It costs about $1,500 for the growing season," he said, adding that the Ukiah Natural Foods Co-op gave the group a $2,000 grant to help with the building of the gardens, and the group's garden development is usually paid for by community donations.

"Our big fundraiser for the year is Sharing the Bounty' in September," he said, adding that much of the staffing is provided by AmeriCorps VISTA. "Our staffing runs out this year, and we're hoping for some more grants in the fall."

Gordon said gardeners have signed up for all of the new plots, but people wanting to get on a waiting list can call 462-1955. Find out more about the program at www.gardensproject.org.

Next: Celebrating 50 Years of Community Action in the United States »

« Previous: VITA volunteers brought $728,000 back to the community