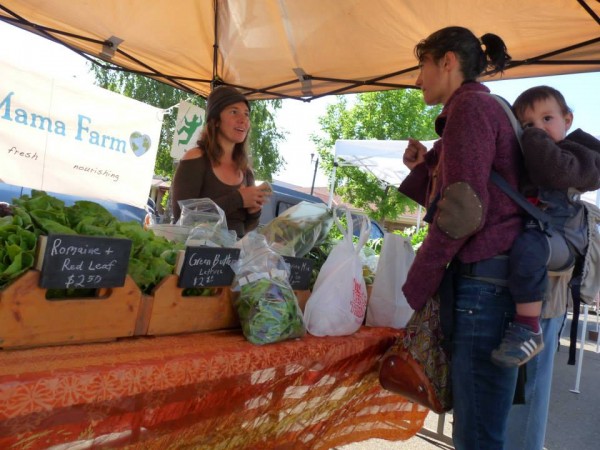 Above: Corrine Hansch of Lovin’ Mama Farm talks lettuce with a customer.

Julie Apostolu is involved at every level: as a market vendor for Frelima Farmette for eight years, as the Fort Bragg Farmers’ Market manager, and as McFarm’s current president. The Fort Bragg market has grown leaps and bounds since she took over as manager four years ago, with over 30 vendors and a market packed full of loyal customers every week. “The local food movement is really growing on the coast,” she says, adding, “I try to bring a level of community, creativity, and good energy to the market.”

Stephanie Logsdon, first-time manager for the much smaller Redwood Valley Farmers’ Market, has learned the tricks of the trade in a few short months. Logsdon notes that the markets are more than a place to sell food. “Most farmers who have been around for a while realize that the value of the market is bigger than how much they make,” she says. “It’s a place for community. That’s why vendors and shoppers keep coming back.”

This sentiment is echoed by loyal farmers’ market shopper Brook Gamble, who moved from Alaska to Hopland two years ago. “Being relatively new in town, this has built my sense of connection to place,” says Gamble. “Plus, in one relaxed trip I can purchase all the seasonal produce I need, as well as bread, meat, cheese, oil, vinegar, flowers and plant starts, and soap. It’s like a grocery store.”

That’s a concept that market managers and vendors alike have been trying to promote: that you can shop at the market for staples, not just specialty items. According to Mendocino Farmers’ Market Manager Sarah Bodnar, “We really want to change the idea that this is a boutique market. We offer staples like onions, eggs, meat, and bread.” And, Apostolu points out the often false assumption that farmers’ markets are expensive. “Very often our prices are comparable and sometimes even lower than at the grocery store,” she says. “Plus, you’re getting food at the peak of harvest that hasn’t been handled by more than one set of hands or trucked anywhere.” Gamble agrees, saying, “I feel good when I support local farmers directly, and there’s no reason not to because the prices at farmers’ markets are comparable to stores.”

Another value is the opportunity to talk directly with the person who grew the food. “You can ask anything you want about what you’re buying – how it was grown, what it tastes like, how to prepare it,” says Bodnar. “This is an incredible and free advantage over shopping anywhere else.” Talking to customers is one of the biggest draws for Matt Leon, who says, “The farmers’ market is the lifeblood of our farm.” He and his wife Corrine Hansch –  together for 15 years with three young children – have owned and run Lovin’ Mama Farm for the past four years, which was “our dream for a long time,” says Leon. He’s grateful for their many loyal customers, but wishes more people in the community would take advantage of the market and support local agriculture. “There’s no reason not to shop at farmers’ markets,” says Leon. “The food is better, the prices are great, and you end up healthier and more connected to your community.”

Apostolu says that even though there is a “high level of satisfaction among participating farmers,” most don’t earn very much at market. “Farmers in Mendocino have to sell at three or four markets a week to be viable, and many of them have a day job as well,” she says. Adds Bodnar, “Every market requires a lot of labor to pick, haul, set-up, sell, and then take down. With so much work and such small margins, you have to sell a lot of lettuce to make a buck.” Though not a farmer herself, Logsdon understands the effort it takes to get to market and does as much as she can to support the vendors. “I’m empathetic toward the farmers when they have a bad day,” she says. “It motivates me to keep working for the market and for their success.”

Bill and Bebing McEwen of McEwen Family Farm know first-hand the challenges of both farming and managing. They sell at and manage the Boonville market, and also vend at the Fort Bragg and Mendocino markets. “As both vendors and managers, we have a greater sense of sympathy toward other farmers because we are just like them,” says Bill McEwen. “There is a heartfelt connection because we are facing the same difficulties.”

Bill is optimistic that farmers’ markets are gaining momentum across the United States in general and Mendocino County in particular. One important factor for increasing sales has been the relatively recent addition of markets accepting EBT, formerly called food stamps. Many markets are also participating in the EBT Match Program; depending on the market, a person can have either $10 or $15 in EBT funds matched by the market, for a total spending power of $20 or $30. This doubles the amount of fresh food that low-income citizens can purchase, and also increases the farmers’ sales. “It’s truly a win-win,” says Logsdon. The program has widespread community support. For example, the Ukiah Natural Foods Co-Op will accept donations for the EBT Match Program the week of August 25, and will contribute up to $2,500 in matching funds.

Although Mendocino’s markets are growing, a very small fraction of community members are regular shoppers. “The biggest barrier to attracting new customers it that it’s hard to bridge the gap between people who love the idea of buying locally, but aren’t taking advantage of it,” says Bodnar. “Like the saying goes, ‘buy local or bye-bye local.’ National Farmers’ Market Week is a great chance to take that extra step to make it to the market and see what you’ve been missing.” To find a certified Mendocino County farmers’ market near you, visit www.mcfarm.org.

Next: Food program injects hundreds of thousands of dollars into the community »