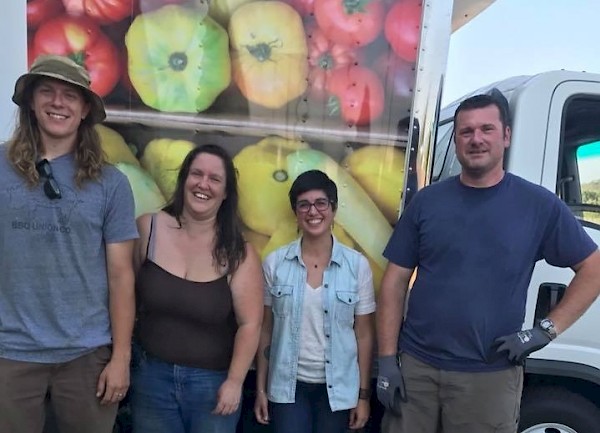 The MendoLake Food Hub, operated by North Coast Opportunities (NCO), has a simple mission: connect local farmers with local buyers. Now in its third year of operation, 2017 sales have far outpaced 2016. Last year, sales totaled $130,000; this year, sales have already reached nearly $160,000, with three months left to go. “It’s great to see that the Hub is doing exactly what it was built to do.  Selling with the Hub opens up whole new markets for small farms,” says MendoLake Food Hub Manager Caroline Radice. She explains, “It isn’t a good use of time or money for one small farm to make deliveries around both Mendocino and Lake Counties, but when the distribution system is shared by many farms, it becomes a manageable task.  Farms are able to sell produce to wholesale buyers around both counties, which means customers are able to purchase the freshest local produce at a variety of locations.”

There are more than 20 farmers in Lake and Mendocino Counties who currently sell their produce using the Food Hub.  Buyers range from grocery stores to restaurants to caterers and even private buyers clubs.

“It’s really wonderful to see relationships between farms and buyers grow over time with the support of the Hub, as well as with new buyers that are coming on board,” says Radice. One such relationship is with Ukiah Natural Foods Co-Op, which has been a Hub partner since day one and purchases large amounts of produce twice a week. According to Radice, “We’re looking at using a bigger delivery vehicle to accommodate everything they order!” Shoppers can look for the Grown Local farmer cards on shelves to find certified organic lettuces, assorted summer squash, purple garlic, lemon cucumbers, and melons all picked fresh just one or two days earlier.

“There is a lot of synergy between the Hub and other programs and initiatives in the area,” says Radice. For example, this summer the Hub started selling produce to FEED Sonoma, another local food distributor in Sonoma County which delivers all over the North Bay Area. The Hub also supplies the Harvest of the Month produce for many local schools. This month, schools in Lake and Mendocino Counties purchased hundreds of pounds of heirloom tomatoes; they came from various farms, but the Hub aggregates, delivers, and bills for each order with one invoice. “Working with the Hub makes sourcing local produce so much easier for the schools,” explains Radice.

The Hub also partners with the Good Farm Fund, also operated by NCO. This summer’s Good Farm Fund fundraiser dinner featured locally sourced ingredients turned into delicious dishes created by local food businesses, many of which were procured and delivered using the Hub. According to NCO Administrative Manager Robyn Bera, who volunteered at the event and works closely with Hub staff, “It is a pleasure seeing farmers and restaurants from Lake and Mendocino Counties working together with the goal of providing greater access to local food in all of our communities. “

The Hub was built from scratch thanks to a Specialty Crop Block Grant from the California Department of Food and Agriculture. Radice is the third program manager and was preceded by John Bailey and Susan Lightfoot, all of whom spent countless hours interviewing farmers and retailers about their needs, researching options, convening public meetings to gather feedback, and finding what worked – and what didn’t – through a lot of trial and error. Where possible, best practices and successes from existing food hubs were incorporated, but the North Coast’s rural geography and limited population centers make storing and shipping produce a particular challenge.

One of the biggest successes has been the cold storage nodes – essentially large refrigerators made from shipping containers – located strategically around Lake and Mendocino Counties. Farmers drop their produce off at these centralized nodes, and drivers pick orders up from a few easy-to-access locations.  According to Lightfoot, who now works as a program officer at the Wallace Center at Winrock International, “the MendoLake Food Hub is on the cutting edge of hubs in the country. Other hubs are replicating the model because they see how successful it has been.”

One focus for the months and years ahead will be encouraging people to shop and dine at places that support local farmers. Customers can stay up to date on current restaurant specials by following Grown Local Mendo Lake – the local food brand associated with the Hub – on Facebook, and by looking for the Grown Local farmer cards on grocery store shelves and in restaurants.

Thanks to the North Coast’s long growing season, the next few months will continue to be busy for the Hub and its producers. Radice doesn’t mind. She says, “When we’re busy, we know our farmers are busy. Our restaurants and grocers are busy. And that’s good news for everyone.” To learn more, visit mendolakefoodhub.com.