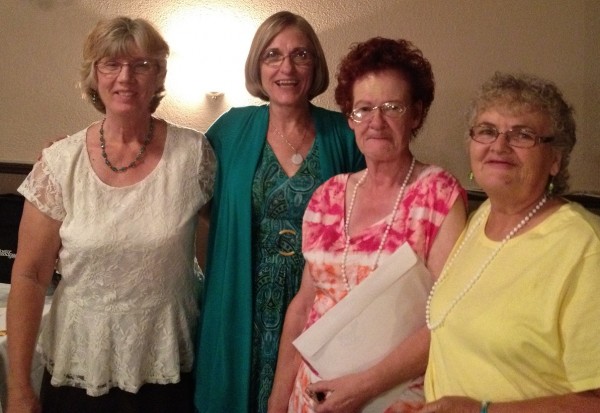 Above: From left, Tracey Wells, Eileen Bostwick, and two foster grandparent volunteers celebrate the program’s success at a recognition ceremony.

For nearly 50 years, the Foster Grandparent Program has been quietly changing the lives of some of the most vulnerable members of society: our youngest and oldest citizens.

The Foster Grandparent Program is a national organization run through Senior Corps. It pairs senior volunteers (ages 55 and older) with children who need extra attention, including Head Start students, English Language Learners, kids with health issues or learning disabilities, and those in the juvenile justice system. A foster grandparent provides special attention which is often lacking at home. “Many of these parents are working around the clock to put food on the table,” says Eileen Bostwick, Foster Grandparent Program Director for Mendocino, Lake, Humboldt, Del Norte, and northern Sonoma Counties. “These volunteers are there for kids whose parents aren’t around, for whatever reason.”

The children are the obvious beneficiaries, but the program has a multifold effect on the senior volunteers as well. For one, it creates meaningful work for an often disenfranchised population. “It refutes the idea that seniors are frail and need services, rather than being able to still provide a service,” says Bostwick. “This country is filled with vital, healthy seniors who are still contributing to society.” The oldest volunteer in the region is 96, and the oldest volunteer in the nation recently celebrated her 105th birthday. Foster grandparents develop the confidence and self-esteem of the children they work with, while also gaining a sense of personal self-worth and value.

“There are many children out there being neglected by their parents,” says Jane Manz, a foster grandparent from Ukiah who has spent 11 years in the program. “They get that extra one-on-one understanding from foster grandparents.” Manz tells a story of a young boy she worked with a few years back who always came to school in dirty clothes. She got into the habit of taking his shirt home and washing it so that he’d have a clean one each day. “I can assure you I’m not the only person doing this,” says Manz. “I’ve known volunteers who buy shoes and socks and belts for these children."

And while foster grandparents give love and support to at-risk children, the program also provides a vital safety net for these volunteers, many of whom live on less than $10,000 a year. All volunteers are given a meal at the site where they work – a true blessing for a food-insufficient population – and low-income volunteers receive a stipend of $2.65/hour. It may not seem like much, but for people who have to choose between turning on the heat or going to the dentist, a few hundred dollars a month is a lifesaver.

Bostwick and her staff help the volunteers find stable housing, seek medical care, and address other issues such as broken appliances. “We’re kind of like case workers for some of these seniors,” says Bostwick, who notes that many of the volunteers refuse to apply for EBT (food stamps) or any other assistance because they do not want to take “hand-outs.” They take pride in their work, and many are able to continue living independently thanks to the stipend they receive.

The North Coast Foster Grandparent Program has been incredibly impactful with Bostwick at the helm since 1990 as the only full-time employee. With four part-time employees throughout the five counties adding up to another full-time position, the program serves hundreds of youth and children on a skeleton crew. “We’re not overstaffed by any means,” jokes Bostwick, “but we do a lot with the dollars we receive.”

Those dollars have been shrinking, both from state and federal cuts and lost sponsorships; many businesses that used to support the program have moved out of the area or gone out of business entirely. “We’re trying to develop new partnerships,” says Bostwick, who notes that community support is crucial to maintain the strict 80%-20% requirement which mandates that 80% of all federal funds must be spent directly on the volunteers, with only 20% going to operating costs. Both cash and in-kind donations such as gift certificates significantly offset the 80-20 requirement.

At the height of the program’s funding in the 1990s, the region supported 120+ volunteers per year. This year, that number is down to 76; to be a viable program, a minimum of 60 volunteers is needed. “Below that, the overhead is just too high,” says Bostwick.

After years of dwindling funding, one final blow may wipe out the program for good. On March 4, President Obama released his 2015 Fiscal Year Budget, which includes dramatic changes and major cuts. Under this plan, Senior Corps would be transitioned to the AmeriCorps program, which mostly focuses on creating work opportunities for recent college graduates. This transition includes a major cut in funding and across-the-board changes to how this and other senior programs currently – and successfully – operate.  Under the proposal:

This proposed change is being made despite widespread national support for the program and a proven track record of success without a single instance of mismanagement or waste for nearly 50 years. Adding insult to injury is that senior volunteers would get a fraction of the benefits that younger AmeriCorps volunteers receive. “It sounds an awful lot like ageism to me,” says Bostwick, even though “a large percentage of this country is aging, and every year we see more and more special needs children. This is a cost-effective program that should be growing to serve both of those populations, not shrinking.”

This sentiment is echoed by many teachers and volunteers who work with young and special-needs children, which makes it that much more unthinkable that a program designed specifically to serve them would be under attack. This may be because the program is not very visible to people who aren’t impacted by it. “We’re not new and sexy,” explains Bostwick, who has always thought of the program as the country’s “best-kept secret.” “As a society we’re obsessed with youth and we’ve stopped giving our elders the respect they deserve,” she says. “But where would we be without the love and support that we get from our grandparents?”

Perhaps the people making these decisions are counting on that unconditional love. According to Joyce Komes, a nine-year program veteran who lives in Willits, “Even if they eliminate the program, I would continue volunteering. The kids need it.” Unfortunately, without the program’s insurance, the schools may not let seniors volunteer.

Even though – for now – foster grandparents are still volunteering, many people are worried about the short-and long-term implications of cutting or eliminating the program. Says Komes, “Every year we have more students who need help in deeper ways than ever before. People think prisons are crowded now… what’s going to happen in 15 years if these kids are abandoned?”