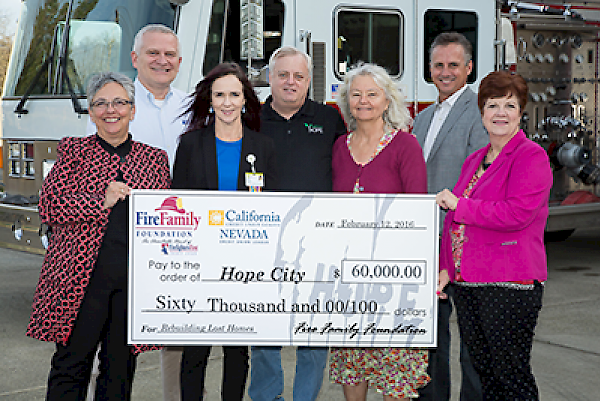 Thanks to the generosity of individuals, businesses, and credit unions, more than $4 million was raised to assist affected residents and firefighters in Middletown and the surrounding Lake County areas devastated by wildfires in the fall of 2015.

The Middletown Relief Fund, established by Fire Family Foundation (the charitable arm of Firefighters First CU) in conjunction with the Leagues, raised $177,970, of which $111,939 came from credit unions. The Lake County Fire Victims Relief—established by the Redwood CU Community Fund, Inc., in partnership with Redwood CU and the Santa Rosa Press Democrat newspaper along with Sen. Mike McGuire—raised a total $2.5 million. The Lake County Wildfire Relief Fund has raised $1.6 million so far.

One hundred percent of the donations went directly to aid victims and relief efforts. The Lake County Fire Victims Relief fund (Redwood CU) were used for a variety of reasons, including replacing clothes and supplies for students, teachers and school employees who lost homes. The Lake County Wildfire Relief Fund already has distributed some $1.5 million of its funds directly to fire survivors. To-date, the Middletown Relief Fund has distributed more than $92,000. Another $15,000 has already been committed. And it continues to aid the firefighters who lost their homes.

On Feb. 12, Mendo Lake CU CEO Richard Cooper, Redwood CU CEO Brett Martinez, Fire Family Foundation Executive Director Robin McCarthy, and Leagues President and CEO Diana Dykstra presented a $60,000 check to Hope City, a disaster relief agency rebuilding homes for Lake County fire victims. The presentation was made at the South Lake County Fire Protection District fire station in Middletown. The funds will help rebuild or build homes for several families in Lake County who lost their homes in the fires. An additional $20,800 is also being donated to the Lake Family Resource Center for needed childcare in the community.

“Our organization thanks Fire Family Foundation and the credit unions who have been so amazing in helping Lake County, and we thank the community for rallying around to get families back into homes. We appreciate and value the partnerships,” said Hope City President and CEO Kevin Cox. He added that Hope City has identified three or four homeowners, who lost their residences in the Valley Fire, to become beneficiaries of the gift. Hope City matches the gift with volunteer labor, so the initial amount becomes a $120,000 donation.

“We appreciate how credit unions across the country donated and Fire Family Foundation collected the funds for victims of the Lake County fires,” said Brett Martinez. “It’s exciting to see how coming together to support Lake County is helping the community move forward.”

“These fires shattered communities and families,” said Robin McCarthy. “Fire Family Foundation answers the need when tragedy strikes. Our commitment to firefighters and fire victims like this enables us to reach out and truly offer a helping hand in times of grief. We are hopeful that our donation will provide a better future for this community.”

Noting the “heartwarming” actions coming from outside Lake County to assist with recovery efforts, Richard Cooper said” “MLCU is thankful for all the donations that came in from credit unions across the state—and beyond. We appreciate the assistance of RCU and CEO Brett Martinez, and the California Credit Union League and its President Diana Dykstra for their efforts in getting the word out about the tremendous need. All this would not have been possible without the assistance of the Fire Family Foundation and its parent organization Firefighters First CU—and in particular its Executive Director Robin McCarthy—for her efforts in working with our unique situation to come up with solutions to assist in the recovery. It is moments like this that make all of us at MLCU proud to be part of the credit union movement.”