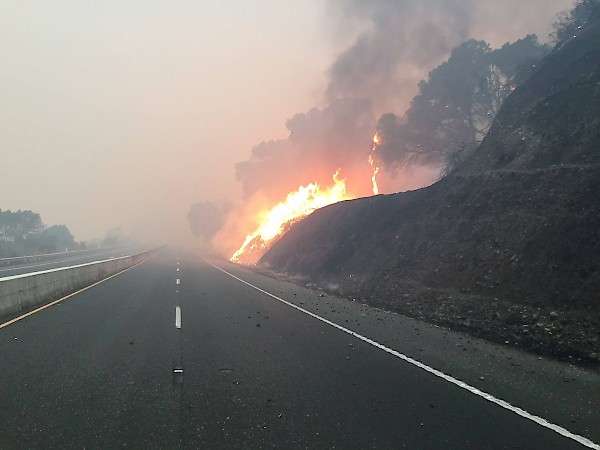 Strong winds contributed to more than 60 wildfires across California’s North Coast starting in the early morning hours on Monday, October 9. Most media attention has focused on Sonoma and Napa Counties; however, Lake and Mendocino Counties to the north are experiencing similarly catastrophic fires.

Lake County is suffering its third major fire in as many years. As of Wednesday morning, the Sulphur Fire has burned 2,500 acres and destroyed an unknown number of structures in residential Clearlake Oaks. Estimates indicate as many as 200 homes may be lost so far, with hundreds of people displaced. The Sulphur Fire is 40% contained. Residents in nearby Middletown were also evacuated in the early morning hours on Wednesday due to the spread of the Tubbs Fire in Napa County to the south.

And, in neighboring Mendocino County, the Redwood Complex Fire has burned almost 30,000 acres in Redwood Valley and Potter Valley and is 5% contained. At least 50 homes have been lost, as well as the iconic Frey Ranch and Vineyard. Many more are threatened.

Between the two fires there are six confirmed fatalities and many injuries. The number is expected to rise.

For the third straight year, North Coast Opportunities, Inc. (NCO) – the Community Action Agency that serves Lake and Mendocino Counties – is working with area agencies to fundraise and distribute immediate and long-term relief funds directly to those impacted by the fires in Lake and Mendocino Counties. “We have built a lot of trust in our communities through our relief efforts,” says NCO Executive Director Patty Bruder. “People know that a donation made to NCO will go to the right place.”

People may visit any Community First Credit Union or Savings Bank of Mendocino County branch to make a donation to fire relief efforts, or online at www.ncoinc.org or www.communityfound.org.

Additionally, NCO’s Volunteer Network is the official Emergency Services volunteer coordinator, and is working in partnership with both counties to place volunteers where they can be most effective in helping those displaced by the fires. Interested volunteers should call 707-467-3236.

Next: Hammers for Hope Breaks Ground in Cobb »